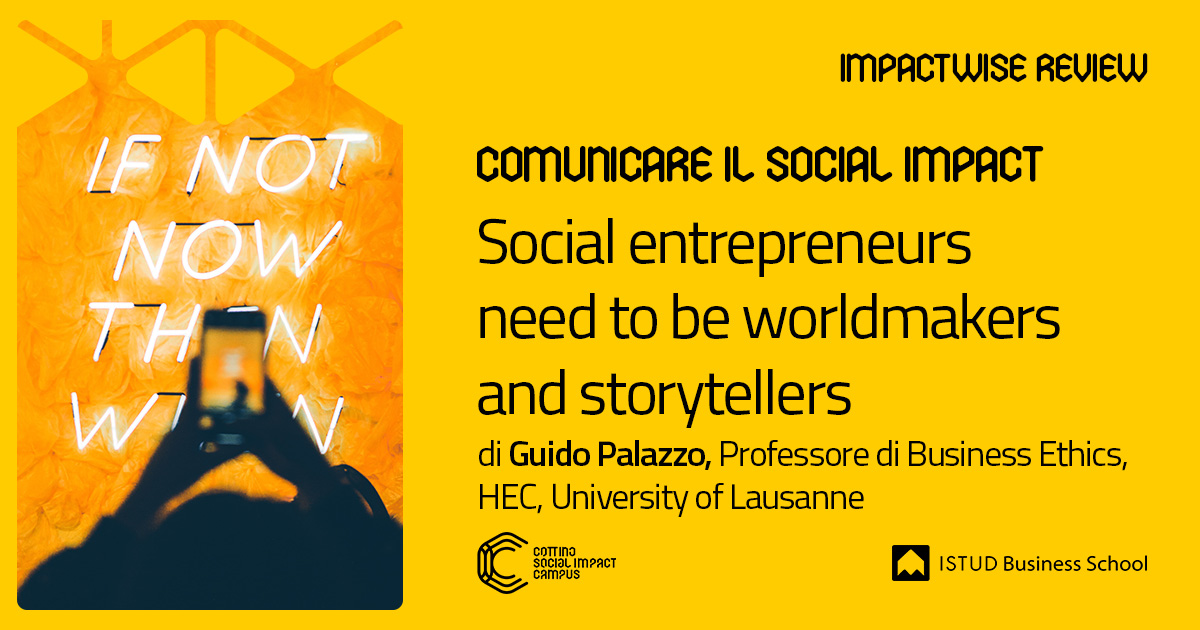 Social entrepreneurs need to be worldmakers and storytellers

Our world is in bad shape.

We face an unprecedented ecological crisis, which Johan Rockstroem and colleagues examined already in 2009 along nine planetary boundaries – from climate change to an accelerating loss of biodiversity to soil erosion, water shortage and chemical pollution. This ecological crisis is aggravated by an ever-growing social divide within and between societies that corrodes social cohesion and ultimately our democracies.

This double crisis is the consequence of our way of life. Our ecological footprint, which compares our consumption of resources (and our production of waste) with the biocapacity of the planet (the available resources and the ability to absorb the side effects of our production and consumption) demonstrates this very clearly. Humanity currently consumes the equivalent of 1,75 planets per year. This is the global average if we take the poor and the rich countries together. The USA as the motherland of modern consumer society is currently using five planets per year. This simply means that the planet would need five years to reproduce and absorb what it can only do so in one year.

In February 2020, about a month before corona hit Europe, then German chancellor Angela Merkel spoke at the World Economic Forum in Davos and highlighted the need for change. As she argued in the Swiss mountains, “these are obviously transformations of a gigantic historical scale… In the next thirty years we have to leave behind the entire way of business and life that we got used to during the industrial age.” Leaving behind our entire way of life! And yet, at the end of the pandemic, consumption has bounced back. In the USA it has even accelerated compared to the pre-pandemic level. Soon they will need more than five planets per year. We know that our way of life has to change, but instead of doing so, we intensify it. The philosopher Fredric Jameson once famously said that “it’s easier to imagine an end to the world than an end to capitalism”.

Our challenge is that to create a different world, we need to imagine a different world first. This is not so much a modern problem as it has accompanied us throughout our history. No citizen of Rome under the reign of emperor Augustus would for instance have been able to imagine a world in which Rome would not be the power center, in which there would be no slaves, in which a pater familias would not have absolute power over his family and in which people would not eat Garum on a daily basis. We take our own social world as an objectively given and unchangeable truth. We take the world for granted as it is.

This world is organized in stories, which we share. Those stories transport our values, our basic believes, and our hopes. Together, those stories form powerful narratives that guide particular societies in particular historic moments. Change thus requires new stories, which drive a new narrative. The Roman empire was for instance slowly put on a new track after Saint Paul travelled to Rome, telling stories of Jesus. He was preaching new believes, values and hopes that turned the established Roman narrative upside-down.

Cottino Social Impact Campus is one of the organizations that early on understood the importance of transformational change and the need to provide knowledge and skills for change makers. Social impact requires tools, and it requires metrics. With the appropriate toolbox change makers can drive the transformation and with the appropriate metrics, they can measure the results of their efforts. However, Cottino has also highlighted one decisive element of change that goes beyond such technical knowledge. Changemakers are worldmaker. With their engagement they help to create a new society. When successful, they tell new stories that touch the hearts and minds of people and have the potential to transform them.

As worldmakers they work together on a new narrative, which gives our societal transformation a direction and loads it with meaning – a narrative that turns the fragmented landscape of motivated social entrepreneurs into a coherent community of change agents.

As worldmakers they need to answer some questions that go beyond their own entrepreneurial project: What kind of society do we want help creating? How will we live in this society? What will be our beliefs, our hopes, our values? How will it be different from today?

Narratives are linguistic structures we use to think and act. Their building blocks are stories which transport our key believes about the world, our hopes and our values. We construct our world through language. If we want to drive narrative change, we first need to understand what the dominating narrative is that blocks the change. Put differently, if we want to think outside of the box, first we need to know our current box. A story might help us to make that box visible and at the same time it can demonstrate the worldmaking power of narratives: The story of the Juukan Gorge cave in Australia. This cave was one of many similar looking rocks in Australia. However, it was not just a rock. For the Aboriginals, it was a sacred site, at the core of a spiritual narrative that guided their lives since 46.000 years without interruption. For the CEO of Rio Tino it was a potential ore mine on which he had property rights. He blew it up with dynamite to maximize shareholder value. Whatever this rock means, has an impact on how humans behave towards it and these are all constructions in their minds: shareholders, money, ancestors, sacred rituals.

Rio Tinto represents “our” narrative. The one that has dominated world making and world destruction over the last 60 years. It has been called the neoliberal narrative. What kind of values, hopes and believes does it transmit? I will just list a few of its elements and you will easily see that this is the foundation on which we have built our institutions:

Humans are born bad. They are self-interested, utility-maximizing and even opportunist actors. Markets are magical, they translate self-interest into welfare and freedom. Competition not cooperation is the driving force of all natural and social processes. Property rights are the most important human right. Regulation is bad and governments are part of the problem. Growth is always good and eternally possible. Consumption makes us happy.

The ecological and social crises have put this narrative under pressure since we realize that all its elements are highly problematic. The cracks of the narrative are opening up. The perfect moment for change is when the old believes do not give orientation anymore. How does change happen? It certainly does NOT happen by just embedding new ideas into old narratives. We have tried this for the last 20 years, arguing for instance that companies can make more money by being more sustainable or consumers can be happier by rather buying brands loaded with more meaning. We have assumed that we can simply go on with our way of life if we just use green energy instead of fossil fuels to drive the machinery. It does not work. We are accelerating the crisis, producing more CO2 than ever before, wiping out more species than ever before. We need a new box.

How could this box look like? We might approach it by asking a few counterfactual questions: What if the default of our species is not competition but cooperation? What if consumption does make happy only until a certain point of saturation only and from that point on rather promotes depression? What if growth is not eternally possible and we need to design our economies along alternative ideas that embrace degrowth? What if humans should not be the only agents with rights, but a river or a dolphin or a forest need to be given the rights of legal persons? What if we give agency to nature?

What if questions are the fuel of societal change. Leonardo da Vinci first had to ask what if humans could fly before he could start to build machines that came pretty close to what made us fly only centuries later. These questions open spaces of counterfactual imagination. They transcend and disrupt established habits and routines. When narratives change, the moral center of society shifts. As philosopher Ludwig Wittgenstein wrote in his “Philosophical Investigations”, “uttering a word is like striking a note on the keyboard of the imagination. To imagine a language is to imagine a form of life.”

Think about the currently changing perspective on trees and forests. We thought about forests as a collection of individual trees fighting to get more of the sunlight than their “competitors” and we now realize that they are strongly connected through fungi in a kind of “wood wide web”. They support each other even across species. They warn each other in case of danger, they share resources and care for the sick and the young. Forests are basically cooperative systems. We best understand them by looking at their connections not at the individual actors. This new understanding of a natural system provides a powerful new metaphor for our social life. In Wittgenstein’s terms, it helps us to imagine a new form of life.

We might build a society, in which cooperation becomes the frame through which we interpret social interaction and not competition as we did in the past. This does of course not mean that there is no competition. It only means that if we look through one particular frame (competition) we get blinded for anything that lies outside of the frame (cooperation). If we change the frame, we can change how we speak about the world, which will change how we act in the world. As David Graeber wrote in his book “The Utopia of Rules”, “the ultimate, hidden truth of the world is that it is something that we make and could just as easily make differently.” Worldmaking happens when we imagine a different world and then try to enact it.

Social entrepreneurs need to imagine the world as a marketplace for stories where they set up their own stall to tell their story. Any social entrepreneur should do what Patagonia or the Slow Food Movement are doing so masterly: Telling a story that works on two different levels: First, they need to find their own story of change, and then they have to embed it in a vision of a different society. This vision does not need to be invented by the social entrepreneur. It is “out there” already. Just make the connections. With his Slow Food Movement, Carlo Petrini tells a story that combines various element that he found out there such as the preservation of traditional and regional cuisine, the encouragement of farming of local plants and livestock, or the promotion of local small businesses and sustainable food choices. Patagonia tells a story of a politically engaged company that fights for degrowth and the rights of human and natural actors. They present themselves as part of a movement for a better world, trying to offer options to their clients that make them opt for used products instead of new ones (they repair them or sell them second hand). The company defines product quality as what is best for the planet.

It is those stories that drive the change, not the local food or the sustainably produced jacket as such. After all, homo sapiens is nothing but a storytelling animal. 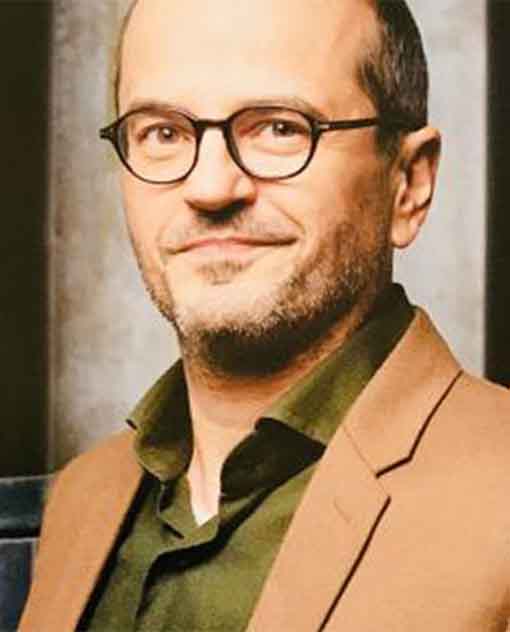 Registrati per vedere i nostri Keynotes